Take the Stress Out of Trading

Before I talk about the markets, I want to congratulate the King of the North,  Kawhi Leonard and the Toronto Raptors for winning the NBA Championship last night.

It’s a fun time to be in Canada right now…

Which means stepping away from the computer screen and enjoying life outside of trading.

I believe in having balance and peace in life.

And when I’m trading… I’m as cool as the other side of the pillow.

You have to be calm if you want to be consistently profitable.

However, too many traders are so stressed out, that:

And that is just the tip of the iceberg… when it comes to stress and trading.

That said, I’d like to walk you through what I do to take the stress out.

Keep reading to find out more, as well as, watch my exclusive clip with Ben Sturgill. of the WealthWise Podcast.

How to Develop A Stress-Free Trading Approach

If you’re not uncomfortable trading… you’re not trading the right size.

That’s something I’ve heard Wall Street traders say before… however, it’s not something I believe in.

I don’t think trading should make you stressed out at all… you shouldn’t fear trading… and there are a number of reasons that could leave you frustrated.

For example, a lot of beginning traders will size their positions too big, put all their eggs into one basket, and risk more than they should.

You see, beginners always think that way… they’ll think a stock is going to go up… and buy as many shares as they can… only for the stock to go against them… and the stress ensues them, causing them to punt their shares for a massive loss.

… once they told me that, I realized I was just gambling because I had no plan whatsoever… if the stock went against me, I wouldn’t know what to do.

Well, I had a 12-18 month period where I just studied the markets, learned charting and how to develop trading plans… and since then it’s been smooth sailing for me.

You’re probably wondering, Petra, how did you become a calculated trader?

It’s pretty simple… I found some strategies that work for me, and focus on those.

For the most part, I’m looking at charts and developing trading plans around patterns I like.

Have Rules When You’re Trading

For example, I use a specific checklist for one of my patterns – the Pinball.

___2. Some form of a bottom forming. Some examples include, but are not limited to. double bottom, lower high, higher low, higher high, multi-bar candlestick bottom.

With this, I’m able to plan my attack…

You see, I won’t get into a trade unless I get all the right signals to get in.

For example, Overstock.com Inc. (OSTK) is showing some of the signs of the pinball pattern… but I want to see some more bullish trading before I get long.

Basically, I keep a watchlist of both Pinball setups and Rounded Bottom Breakout (RBB) setups, which I send to my clients.

For example, if I’m looking to trade a specific stock, I’ll identify prices I’m willing to buy the stock, where I would stop out… and where I would take profits.

Not only that, I have a thesis behind the trade… and my risk per trade stays the same. In other words, I’m never risking more than 2% of my portfolio on any one trade.

Think about it like this… if you’re stressed out about trade, chances are you don’t have a plan or a really good reason to get long… or you’re in too big of a position.

If the stock is moving against you, you’re probably thinking I should buy more and get a better average price… that way, if the stock goes up, I’ll make a lot more money.

Well, that’s not the right thing to do… unless you have a clear reason to buy more shares.

Rather than taking off risk, many beginners pile on risk… leading to more stress.

On the flip side… what happens if you don’t have targets?

Let’s say a stock is moving to your favor… a lot of the times you get euphoric and think the stock can run further than it actually can… a lot of the times, you’ll see stocks run up and hit a resistance level, only to pull back. What ends up happening is you give up your profits and turn a loser to a winner.

The quickest way to fix these problems and trade without stress is by having a plan and knowing what to do if the stock moves to your favor or against you.

For example, here’s a look a chart I’m watching in Rent-A-Center (RCII). 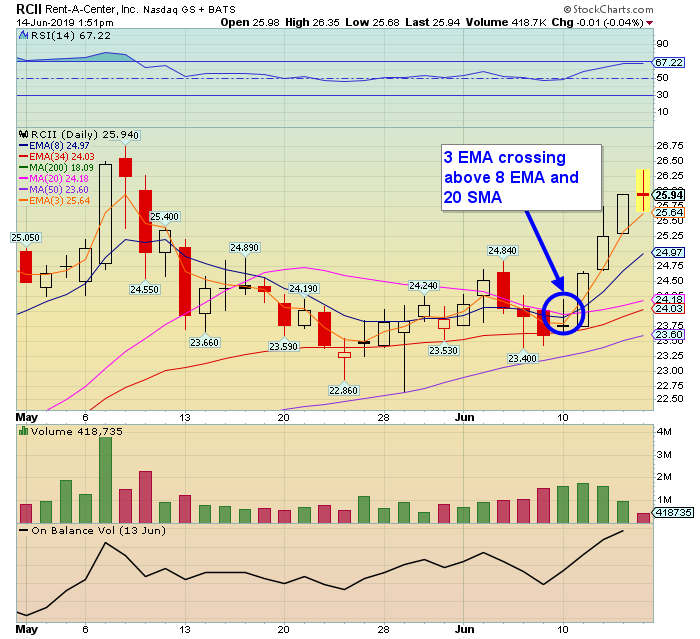 I was looking to buy the stock based on moving average crossovers. More specifically, the orange line (3 EMA) crossing above both the blue line (8 EMA) and pink line (20 SMA).

Here’s what I sent out to clients.

Basically, I was looking to buy RCII anywhere between $24.68 to $25.10. The stop-loss price would be $23.52… if it gets below that, I’m out… I’m not going to try to dollar cost average because I would just be trading off emotions.

Thereafter, I would look to slowly piece out of the position, as I have 3 profit targets.

As you can see, if you know where to stop out and take profits… and plan your trades, it removes all the stress. You can set your orders ahead of time and just check in from time to time, rather than staring at your screens all day.

If you’re interested in learning more about my trading journey, and how I got involve with trading when I was 50…

You can find out more in my interview with WealthWise Podcast host Ben Sturgill in the exclusive clip below.

Now, if you’re unfamiliar with my style of trading, and want to learn how I’m able to take low risk, while consistently hitting winners… click here to get started.